Pedagogy: This is the learning paradigm that many of us are most familiar with. This paradigm is hierarchical in nature as the teacher/professor is the “knower” of all things and only this elite group of people is able to impart knowledge to learners and the process is dependent on this relationship. This teacher centric way paradigm is where we obtain the phrase “sage on the stage” model of education where the student is expected to absorb dictated knowledge rather than construct it for themselves, usually for the purpose of some assessment (typically a standardized test) to show that they have gained the essential knowledge before they can move on to the next grade or level.

Andragogy: This paradigm is an interesting hybrid between pedagogy and heutagogy insofar as it retains characteristics of pedagogy, but is casually stepping outside of its comfort zone and adopting more connected and constructivist sentiments. This learning paradigm is used in adult education in which the students are more self-directed, thus changing the role of the professor slightly to more of a facilitation role rather than the sole creator of learning process. Also important within this paradigm is the introduction of context; adult learners have life experiences that become learning experiences. As Gerstein (2013) describes “the principles of active, experiential, authentic, relevant, social-networked learning experiences are built into the class or course structure.”

Heutagogy: Andragogy paved the way for heutagogy because andragogy introduced the methods and technologies that became commonplace enough to support the transition to a heutagogical approach to education. Heutagogy is a representation of the time; education can occur anywhere at any time via a multitude of technologies outside of the “traditional” classroom. Within the model the role of teacher is significantly altered too. They are no longer simply the licensed professionals who prepare lesson plans; instead anyone and everyone can be a teacher in their own way because knowledge is constructed socially and context matters significantly.

Check out these two graphics for further explanation on what these are: 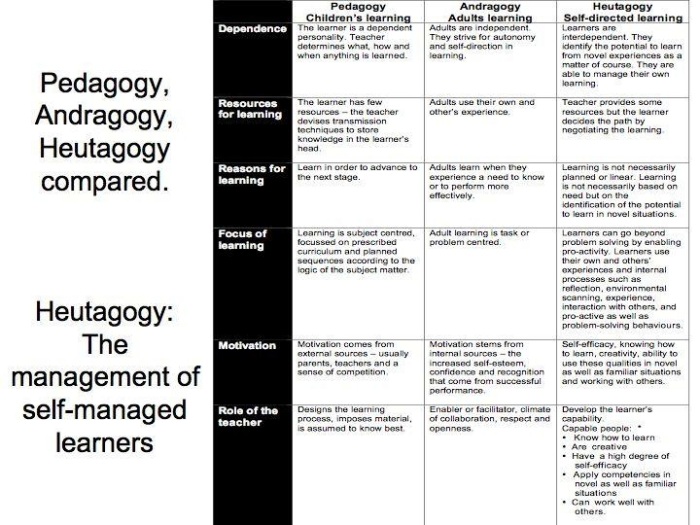 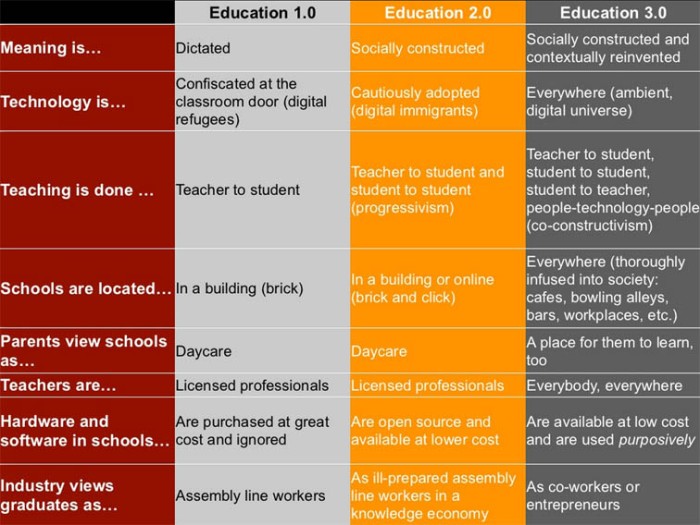 Although all these words end inn “gogy” it is important to also note their differences outside of their definitions. Pedagogy is the type of education typically utilized in the education of children, and is most likely the type of paradigm that was experienced by you, the reader. Andagogy is applicable to adult education more so because adults have experienced life significantly more than a sixth grader, for example. Because of this, adult learners are more likely to learn by drawing from experiences they have had and as such differ deeply from children who may or may not have any context in which to learn from. Heutagogy takes the initial steps in andragogy a step further and connects each individual student to the learning in a new way without a hierarchical structure of teacher-student, but a structure in which everyone assists in the construction of knowledge for one another. This model is the most learner-centric whilst the other paradigms are more teacher centric.

Before I begin, please watch this video from the Nellie Mae Education Foundation on Competency-Based Education.

Competency based learning, ultimately, is a pretty simple model of learning. Educause (n.d.) defines CBE as an “approach [that] allows students to advance based on their ability to master a skill or competency at their own pace regardless of environment.” This approach gained popularity because of its ability to drastically reduce a precious commodity. Can you guess what it is? No, it’s not money… Alright, I’ll tell you: time. Kamenetz (2014) points to the fact that we measure most of our educational accomplishments by time such as first or second year masters student. CBE is unlike this notion and instead directly measures learning, not the time spent doing the learning.

Competency based education can, to some degree, occur within pedagogy, andragogy, and heutagogy. The worst fit is within pedagogy. The focus within pedagogy is the imparting of knowledge from sage to student in a process designed by the teacher, controlled by the teacher, and at the pace of the teacher. Competency based education required some learner focus. Furthermore, there is logic in the educational format that is supposed to be followed and very rarely allows for deviation. On a final note, since pedagogy is typically used in children’s education- it is less likely to be useful within this system due to not having many experiences that may have made them masters of skills or other competencies.

The andragogical system would be much more open to CBE as many adult learning programs are already (Western Governor’s University for example). It would make a lot of sense to use a competency related model for adult groups because they are more likely to have engaged in real world experience that would justify less time devoted towards certain subjects.

The heutagogical system, I think, may be the best paradigm for CBE to function in. Because everyone is considered a learner in this paradigm, learners have more options for education to help master that skill. Furthermore, this educational systems non-linear approach is best suited for competency-based education; students can excel quickly at what they know and devote more time to the subjects they need to learn.

The Future of Competency-Based Education

In this section, I will examine CBE from three different angles and hypothesize based on evidence at my disposal what the future of CBE might bring us. I will look at CBE from the view of the governmental oversight/regulation, hybridization with other learning models, and cost of education/economics of higher education.

When it comes to higher education in the United States, the U.S. Department of Education and its shiny red tape usually comes to mind. Government involvement (a contentious political issue) can result in a myriad of regulations that are designed to hold the system accountable, but sometimes miss their mark. One of the chokeholds that the U.S. Department of Education has is federal financial aid. In 2011-2012 72.8%  of full-time, full-year students and 51.1% part-time or part-year students at all institutions received federal aid (NCES, 2014). Lots of students utilize federal aid for their education. How is all of this relevant? Fain (2015) reported that the U.S. Department of education is allowing 40 colleges to experiment in competency-based education while allowing them a waiver from some of the federal rules on financial aid. Basically, the federal government is performing experiments to determine if CBE is a viable learning model and if they can adapt federal funding to that model. The current financial aid model is relies heavily on the notion of time which is bypassed in CBE. Although this is just a first step, it is an important first step. Yesterday’s education does not work with today’s learners. If the federal government determines that CBE is a viable alternative and can justify future waivers to certain rules to support CBE it opens a lot of new doors for CBE.

However, I think CBE will face an important regulatory challenge in the future: accreditation. If CBE becomes common, regulators will intervene for quality assurance. Will “competencies” have to be accredited by regional accreditors? How will institutions differentiate themselves from others if they have similar competencies? At this point, I think there are a lot of unknowns.

I am a fan of mixed method approaches and hybridization of strategies in most areas of my life. I have similar opinions when it comes to CBE. I believe that CBE can be combined with other learning models to create stronger educational models and that it already is combined with more as well. Many CBE programs are online, thus utilizing multiple models already. I think this trend will definitely continue and that we will see more integration of multiple approaches. The one that comes to mind is gamification. Gamification and CBE would result in an open world style educational approach where students could gain achievements for mastering various “skills” that count towards their degree. The integration and hybridization of learning models with CBE is something that I see within its future especially with gamification.

Higher Education is not a cheap investment. With the average cost of private institutions being $134,600, public institutions $39,400, and a combination of two years community college and two years private institution being $77,400 over four years the previous statement may be the understatement of the year (Saving for College, n.d.). These rates are increasing and most predictions show that the increase is going to be steady. Where does CBE fit in? CBE can be offered more efficiently than the traditional model. CEO/President of the Lumina Foundation Jamie Merisotis (2015) recommends the following:

Each one of these suggestions involves CBE. Build clear pathways to CBE programs that are low cost, are of a high quality and focused on student learning, and are more affordable than current models. None of Merisotis’ (2015) are a perfect solution that do not invoke problems of their own, but the rising costs of college education have already led to the creation of many programs offered as a substitute for extraordinarily expensive institutions. The fact that I am writing this blog post about CBE is, in a way, a reaction to the costs of higher education. It is one of many parts to a possible solution and it is staring us in the face. Future calls for its integration into the system will become more frequent and potent. The question is not if, but when.