I do not think that it is any secret that I am oriented more towards challenge than support. Sanford (1962) made it particularly clear that you need a dash of both rather than a stiff dose of one or the other, but over the past several years of supervision experience I have learned that I am prone to offering challenge from the start.

Throwback: In July as a part of training the full-time professional staff was asked to carefully consider one word that represents themselves personally and professionally. I originally disdained this activity because there were so many words that I felt applicable. I actually spent hours searching through the depths of online thesauruses and dictionaries before I finally settled on one word: heuristic. 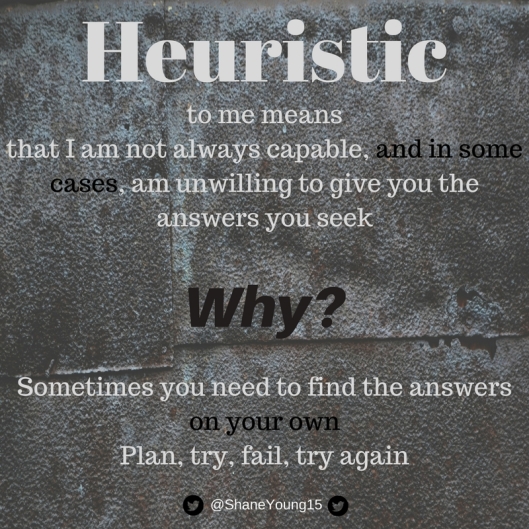 Throwback continued: I come from a liberal arts college where critical thinking permeated every single part of my studies. I was constantly challenged to look at my assumptions, look for hidden meanings, and connect to contemporary happenings in an effort to better understand why they were occurring at that specific moment. I was not often given a direct answer, but pushed to find my own. Even when I thought I had answered the battle was only half won; I still needed to defend my assertion.

My entire academic experience was built on challenge and resisting support (I am sure my old supervisors have some potentially funny stories of me refusing help). My graduate assistantship experiences have also helped solidify my gravitation towards challenge.

Fun fact: I once received anonymous feedback that “Shane doesn’t directly answer your question. He asks a lot of questions that make you realize that you already knew the answer. It would have been faster if he just answered the question.”

Yes, it would have saved both of us quite a significant chunk of time, but I do not think that it would have been beneficial in the long run to simply answer the question. I still believe in the importance of helping students realize that they have a lot of the answers they seek.

Then it all changed when the fire nation attacked…. (Avatar: The Last Airbender reference, sorry). It was a very different experience while in the midst of student staff training at an institution that I had spent only a month at. My staff, especially the new resident assistants, needed me to help facilitate their learning and to help them understand the pieces of crucial training: they needed support. Incidentally several of my staff members may have disliked me at the beginning of the fall because instead of directly answering the question, I asked what they thought was the answer and asked questions instead of simply answering the question.

I was not being the supervisor that they needed. They were surrounded by returning staff members whose main preoccupation was asking why things were different from last year (a post on change is in the works for the future). They experience long days filled with information. They were not even sure what was the most relevant information that they received from those days. I would not call my first several support conversations “successful” but they were not failures engulfed in flames. I steadily began to develop skills in offering support, mainly because, with time, I learned to support only pieces that needed support. Instead of trying to re-teach the entire day of training, I began to listen more attentively and ask questions to clarify what the crux of the question was.

This has taken many forms. I still regularly allow a moment of silence before asking “So, what is it that you are asking?” I do this mostly for those who unwittingly unleash a monsoon of information, to provide background but easily lose themselves in the narrative. I repeat questions back using alternative language that makes more sense to me, to see if we are on the same page. And then I answer the question when I have the answer. If I do not have an answer, I find it and ensure those asking the question do too.